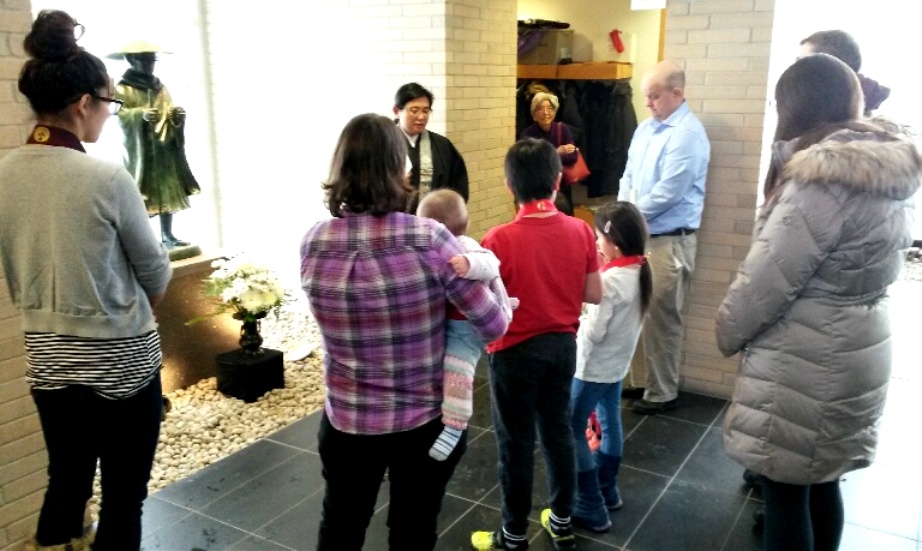 On Sunday, January 19, 2020, TBC held its Ho-onko service. Ho-onko marks the passing of the founder of Jodo Shinshu school of Buddhism, Shinran Shonin. We mark the day he was reborn in the Pure Land, January 16, 1262, and as such is considered Jodo Shinshu’s most important annual observance. I was very honoured to have been asked to lead the service for the occasion. January, being the first month of the new year, is a time that is considered by many to be one of renewal and in this spirit, I like to take the occasion of Ho-onko to reaffirm my respect and gratitude for Shinran Shonin and the Nembutsu practice. Not just me, but Shin Buddhists in temples all over the world are inspired and moved to gratitude on Ho-onko by reflecting on his life.

Shinran was born in 1173 in Japan, to a relatively privileged family but one that fell on hard times during a time of war and natural disasters that brought tremendous turmoil not just to him, but to the Japanese population. He entered the life of a Buddhist monastic at the age of 9, after becoming orphaned. Legend says that even at that very young age, he was keenly aware of people’s suffering, including his own of course, and recognized, as did Japanese society at that time, that becoming a Buddhist monk was a path that would end in enlightenment and peace. In fact, monasticism was the ONLY path that would lead to enlightenment. When he arrived at the temple to receive tonsure, the shaving of his head, the senior monk told him it would be done the next morning because he had arrived too late in the evening. Shinran famously asked that he receive tonsure immediately, stating through a poem that no one could be certain that the next morning would come for them. He did not want to miss the opportunity to start immediately on the path to enlightenment.

With this fervour, he lived the life of a Tendai monk for the next 20 years, until he came to the realization that it was getting him nowhere. Instead of moving towards feeling free of suffering, the intense monastic practices made him concentrate even more on his own suffering. He admitted failure, left the monastery and decided to do a 100-day meditation in the hopes for inspiration. On the 95th day of the retreat, a vision of Avalokitesvara (the Bodhisattva of Compassion) came to him and told him to seek Honen who was another monk who had left the monastic life. They met, and listening to him describe the Nembutsu (voicing the name of Amida Buddha – Namo Amida Butsu) practice, Shinran fast became a devoted follower, as did many others. The Nembutsu practice became so popular that the Buddhist establishment in Kyoto imposed a ban on it and sent Honen and Shinran into exile. Shinran, his wife (Shinran was the first Buddhist priest to be publicly married in Japan) and family were forced to move to a village in northern Japan and Honen was exiled to the south of Japan.

Needless to say, life in exile was difficult but villagers grew to respect Shinran as he worked hard to contribute to the well-being of the village. Villagers also learned to respect Shinran as a Buddhists teacher because although his monastic status was taken away from him, he continued to teach and study the Nembutsu path. This would prove to be an important time in his life because it allowed him to experience the power of the Nembutsu for the lower social classes, including, of course, himself and his family. The exile was lifted after a handful of years and Shinran and Honen were pardoned. Unfortunately, teacher and student would never be reunited, as Honen died shortly after their pardon. Shinran moved south near present-day Tokyo and lived the rest of his life, until the age of 90, studying and spreading the Nembutsu teaching. He wrote his most significant text, Kyogyoshinsho (the shortened form of the Japanese title that translates as “The True, Teaching, Practice, and Realization of the Pure Land Way”)

For Ho-onko, and indeed every morning in temples across Japan, Shin Buddhists chant Shoshin-ge (Hymn of True Entrusting) that comes from the second chapter of this work; the chapter on Practice. This work is important to Shin Buddhists because it is where Shinran lays out the doctrinal lineage of the Nembutsu practice through sutra and commentaries that were written and recorded by 7 Buddhist monks who came before him (2 from Japan [including Honen], 3 from China, and 2 from India), right back to Sakyamuni Buddha.

I am in awe to think that we in Canada in the year 2020, are able to read his words and to know that the same sounds – Namo Amida Butsu – come out of our mouths as they did out of his. It is impossible to know all of the causes and conditions that brought the Nembutsu practice and each of us to Toronto Buddhist Church, but Shinran Shonin is one person to whom we can direct our gratitude.