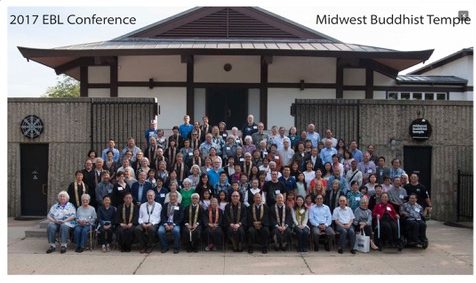 Our deep appreciation and thanks go to the Midwest Buddhist Temple in Chicago for hosting the Eastern USA and Canada at the annual Eastern Buddhist League Conference. The Toronto Buddhist Church has participated in these conferences from 1947 when a young Rev. Tsuji took some young Toronto Busseis (Young Buddhists) to the Midwest Buddhist Temple to take part in workshops, the Dharma and to meet other sanghas.

The theme of this year’s conference, “North American Buddhism: A Path Forward”, looked at many aspects of the relevancy of our faith and the community around us in terms of inclusion and diversity, selfless giving, Buddhism and the environment and how one can hold many different beliefs and religions within Jodo Shinshu Buddhism. The keynote speaker was Rev. Kurt Rye, resident minister of Placer Buddhist Church in California. Rev. Kurt grew up in the Washington D.C. area and was a minister at Ekoji Temple. Rev. Kurt’s professional background was in social work and in the mental health field before studying to become a Jodo Shinshu minister. Rev. Kurt’s keynote address was about the many ways or paths that we are moving toward in North American Buddhism.

We also had the opportunity to take part in various activities such as touring a local micro brewery, a taiko workshop, a minyo odori workshop (Japanese folk dancing) and an outing to the local casino.

The site of the 2018 Eastern Buddhist League Conference will be in Toronto over the Labour Day weekend (August 31st – September 2nd). Please put the date aside to come and attend to make new Dharma friends, to reacquaint with old friends and to take part in the Dharma energy that is created!