A farewell to Michael Hayashi Sensei 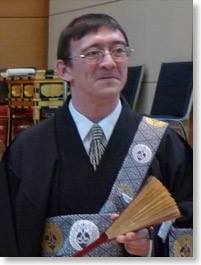 Our dear friend and Minister has left us much too early.

At age 50 he should have had many more years to enjoy his family, friends and his temple, but unfortunately that was not the case. On Dec 4th of last year, he passed away in Winnipeg. He had his wife and children at his side.

Michael was born and raised in Thunder Bay, Ont. He was greatly influenced by his Grandfather who was the lay Minister in the local Temple. Michael lived with his grandfather for many years and attended school and went on to receive an Honours Bachelors of Arts in English and Education at Lakehead Universary. He was encouraged to continue his education in Japan where he received a Master of Arts in Jodo Shinshu Theology at Ryukoku University in 1997.

Michael was posted to Alberta in 1997 and then to British Columbia in 2000. He came to Toronto in 2010 and eventually to Winnipeg in 2014. Michael is survived by his wife, three sons, his mother, sister and numerous other relatives.

When Michael first came to Toronto, being a country boy at heart, he had some reservations about driving in city traffic. The 400 series highways seem to unsettle him and occasionally when he would come for dinner, he would stay over so he could drive home in the daylight the next morning.

He was a minimalist at heart and it was a joy to watch him eat. Plain and simple was his style. He had some back pain so he would choose to sit seiza style or if outside in the morning after breakfast, he would crouch low with a coffee in one hand and a smoke in the other. He would enjoy the garden, his friends, the people at the Temple and the Buddha Dharma.

Issues of the modern world caused him great angst, like the government, big business and the social issues surrounding the haves and the have not’s. Material things were of no interest to him. I used to tell him that I thought of him as Don Quixote as he decides to take up his lance and sword to defend the helpless and destroy the wicked.

He loved his family, and when his wife Kiyomi had to go to Japan to see an ailing relative, he rushed to Kamloops to be with his three boys. We can be sure he taught his boys all he could in the time he had with them. He was such a deep thinker and his Dharma talks reflected that. He kept us enthralled with every word. One friend told us that yes, he was different, but refreshingly so. Someone once said, after a particularly good Dharma talk, “he hit that one out of the park”

Sensei Michael was a true and trusted friend to many of our congregation.

Even near the end, he continued to teach us and show his compassion for others. In the hospital, he received emails and replied to them. He talked to people on the phone. His family was able to be with him during the last few days and those of us who couldn’t be with him were able to relay our messages of love and concern to him.

When the doctors told him of his terminal illness, he and his good friend, Harvey hugged and cried. Michael said “ I guess now I will really find out what this pure land is all about”

It sounds like the Michael we all remember. Now we have all cried, but to no avail. He has become white ashes as we are taught. He was told that his grandparents and uncle were waiting for him and that the pure land was waiting his arrival. It was to comfort him but we have found great solace in knowing that he has now reached that other shore and now waits for us. One of the last things Michael had to say to his close friends was, “Just carry on being the people I love and respect and everything else should flow naturally from that”

We will never know why he didn’t treat or at least seek out medical help for his illness. Surely, he must have known that something terribly wrong was going on in his body.

Our sincere gratitude goes out to all of you who have come today to show your caring and respect for Michael Hayashi, Sensei. To Michael, we say thank you and sayonara……