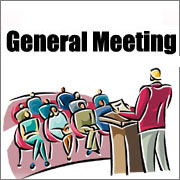 1. Approval of the Minutes of the Annual General Meeting held on Sunday, January 22, 2017;
2. Presentation of Financial Statements of the Temple for the year ended October 31, 2017;
3. Consideration and approval of the Budget for the year ending October 31, 2018;
4. Election of Directors;
Such other business as may properly come before the Meeting.

A second Notice of the Meeting with further details will be posted in the Guiding Light for January, 2018. Please note that while attendance at the Meeting is open to all friends of the Temple, only members of the Temple will receive a package of reports and will be entitled to speak and vote on any matters coming before the meeting. A member of the Temple is
(a) one who has been designated by the Temple as an honorary member, or (b) an individual whose written application for membership has been accepted and who has paid his or her membership fee for 2017.

BY ORDER OF THE BOARD