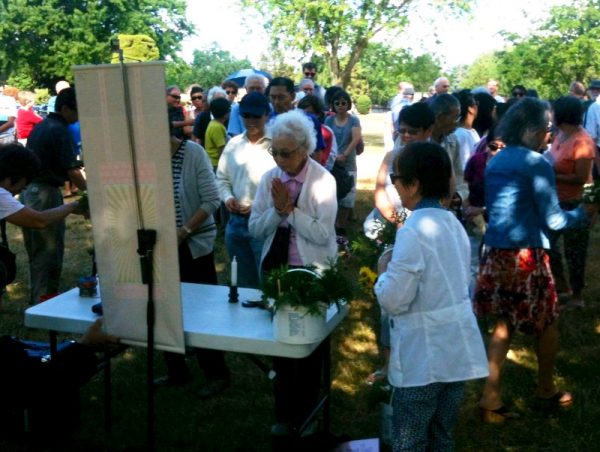 The Obon Committee and the Religious Committee have worked together to prepare the 2017 Obon programme, this year being held on the 8th and 9th of July.

We try hard to bring a large measure of respect to this very important date in the Buddhist calendar. Let us gather at our respective cemeteries to lay flowers and chant in memory of all our loved ones.

Please join us at the Japanese Canadian Cultural Centre in the evening at 7:00 p.m. for a short service followed by Obon dancing. On Sunday morning there will be a 9am service for the Hatsubon families, the regular English service at 11 am and the Japanese service at 2pm. Please bring your homyos and lanterns and remember to pick them up after the services. Homyos for the Hatsubon familes will be picked up in the social hall.

Following is the cemetery schedule and please changes this year.

With winter now just a memory, we welcome Spring and the promise of a warm summer. The Obon Committee has been preparing for this most respectful weekend. Saturday we will make our annual visits to the many cemeteries in the Toronto area and beyond. Sunday we gather at the Temple for Hatsubon Service, as well as English and Japanese Obon Services. Please bring Homyos and Obon Memory Lanterns for the service. They will be returned to you immediately afterwards.

There have been several time changes this year to the schedule. We are also happy to inform you that Rev. Tomofumi Fujii will be in attendance at Necropolis, St. James, and Mount Pleasant Cemeteries this year as Bishop Umezu’s schedule is fairly busy.

The following is a list of individual graveside services:

(or time to be arranged)

Salem – time to be arranged

The Obon committee is grateful for the continuing dedication of all volunteers to ensure the success of the Obon tradition. We ask families for their patience while waiting for the arrival of the Senseis and choshos.

Obon services will be held on Sunday, July 9 and we are pleased to announce that Bishop Kodo Umezu of the Buddhist Churches of America will be our guest speaker.

Bishop Kodo Umezu was born in Fukuoka, Japan. He graduated from Ryukoku University in 1973 and immediately made his voyage to the United States to become a BCA minister. He was first assigned to the Fresno Betsuin and at that time continued his studies at the Institute of Buddhist Studies where he received his Master’s Degree in 1976.

Later that year, he enlisted in the U.S. Navy and after serving for four years, he returned to the BCA ministry and was assigned to the Los Angeles Betsuin in 1980. In 1987 Rev. Umezu was assigned to the Buddhist Church of Oakland and in 1996 he was appointed as the Executive Assistant to the Bishop under Bishop Hakubun Watanabe. He was then appointed Director of the Center for Buddhist Education in 2006 by Ogui Socho and on April 1, 2012, he assumed the position as the 14th Bishop of the BCA sangha.

Bishop Umezu is married to the former Janet Teraoka, and together they have three daughters, Amy, Stacy and Michelle.